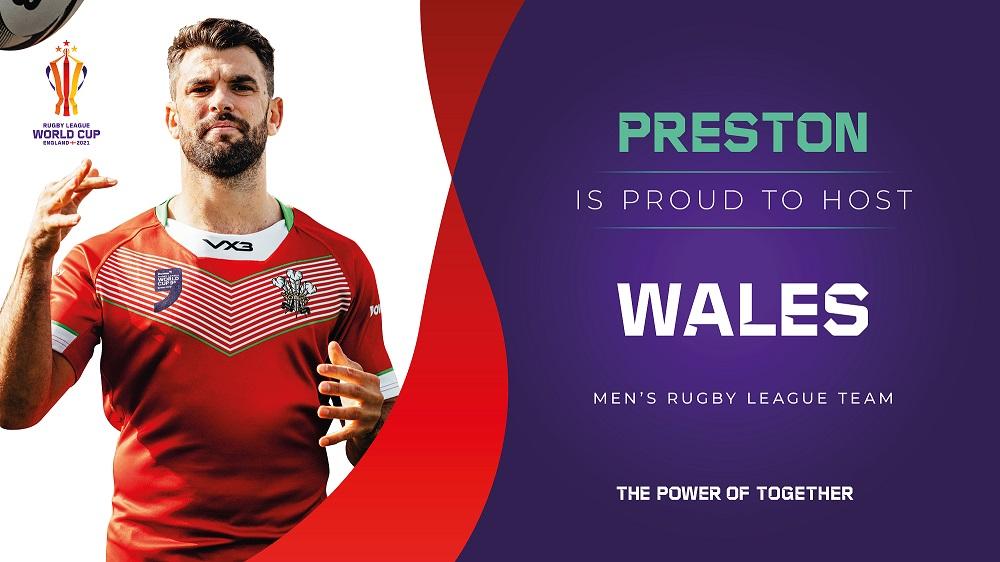 The Rugby League World Cup is the pinnacle event in international rugby league, and on Saturday15 October, the hosts England will face Samoa at St James Park in Newcastle. Like no other form of the game, players compete with the pride of their nation at the heart of every performance.

Furthermore, RLWC2021 will be the most visible rugby league event in history, with all 61 games in the men's, women's and wheelchair competitions being broadcast live on the BBC, with many of the games taking place in our region.

Preston will play its part in the Tournament by being the proud hosts of the Wales Rugby League men's team, featuring athletes in the elite squad that play in teams in the North West and further afield in the high-profile Australian Super League sides.

With its rich connection with sport, the University of Central Lancashire (UCLan) will be providing training facilities for the players, but the key reason for hosting the team was to boost participation in the game and create a legacy.

And it looks like this is already happening. Through the Preston North End Community Education Trust, a partnership with Preston City Council, UCLan and the Rugby Football League, its community development officer, Ryan Allen, is building school engagement and working with Preston and South Ribble Rabbitohs to create a rugby league team for the City.

Preston City Council also sees the Tournament as an excellent method of promoting the City, famed for its hospitality, but how sport plays a critical role in developing the local economy while helping improve physical, mental and social wellbeing.

If you want to see new rivalries form, old ones play out with vigour and pre-game Hakas, Sipi Taus, and hymns set the stage for clashes of epic proportions; now's your chance. Don't miss what is expected to be the biggest and the best Rugby League World Cup.

To find out more about the Tournament's fixtures and tickets, visit RLWC2021 or Follow #RLWC2021 to engage with the Rugby League World Cup 2021 build-up and ongoing conversation.

Learn more about the many aspects of the RLWC2021 by hearing from the Tournament's ambassadors at RLWC2021 - our ambassadors.

Get free tickets and merchandise with Preston's RLWC2021 Free Draw

Preston City Council in partnership with UCLan are giving you the chance to enter a free draw for official tournament tickets or merchandise, so if you'd like to see rugby league sports stars from across the world compete at the highest level, enter our free draw. It's so simple!

Enter the free draw through the following ways:

Simply email your name, address and contact details to rlwc2021@preston.gov.uk, with 'RLWC2021 Free Prize Draw' in the email's subject line.

You can enter the prize draw by completing an official RLWC2021 prize draw postcard with your name and contact details. Postcards will be located in and around the City's shops and venues including Preston Market. The postcard can be sent to Preston City Council or delivered to the Town Hall's reception in person.

If you've been successful, we'll notify you as soon as possible.